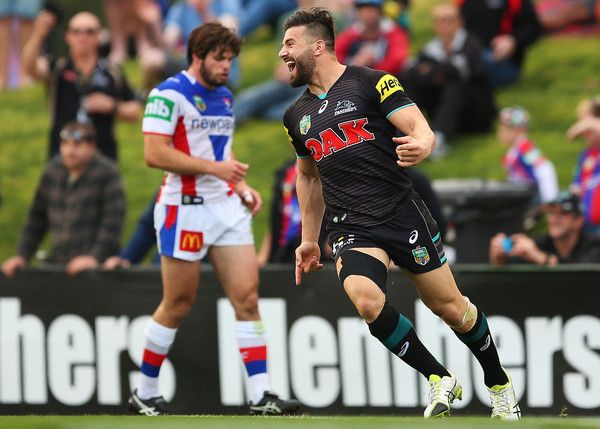 The Panthers history with the Knights from Newcastle go back to Australia’s bicentennial year in 1988.
Their first meeting was at a wet Penrith Park in Round 5 – the Panthers appeared to heading towards a comfortable victory when it led 12-2 just before half time, but in the second half it became an arm wrestle as the home team won 14-8. They would meet again later in the season at Newcastle, with the Panthers pulling away in the second half after being 12-all, to win 23-12.

In their first 8 meetings, the Panthers would remain undefeated, with 6 wins and 2 draws – both being at Penrith in 1990 and 1991. 1990 was a 6-all try-less draw, whilst the following season, a see-sawing battle in Round 2 saw Penrith comeback from 12-4 down in the first half to lead 18-12 late in the second half before Newcastle scored a converted try to make it an 18-all draw.

Newcastle would finally breakthrough for their first win in 1992, recording a 14-2 win at Penrith Park and repeated the dose with an even more comprehensive 26-4 win at Marathon Stadium. And the ledger would gradually swing in the Knights favour, with Penrith only winning once – 24-13 at Penrith Stadium in 1993 – and also a 13-all draw in 1998 over 9 match stretch to close the decade.

This stretch was briefly ceased was also a gap in their head to head during 1997, as the Knights participated in the rival ARL competition.

The start of the new century saw the Newcastle continuing the ascendancy over Penrith, winning 5 of the 6 meetings until the end of 2002. The solitary win for the Panthers was a high scoring 34-26 win at Marathon Stadium in 2000, which was their first win in Newcastle since 1990.

One of these losses was a 60-18 loss in the final round of 2001 at Energy Australia Stadium, the final act in a season where the Panthers were given the unwanted wooden spoon for finishing last. At the time, it was the club’s fourth heaviest defeat and only the second time they had conceded at least 60 points in a match. For Newcastle, it was an 11 try warm up for their finals assault, which would finish successfully be being crowned premiers on grand final night.

At the end of the 2002 season, Newcastle were slightly ahead on the head to head, winning 12 of the 23 meetings, with the Panthers having won 8 and 3 draws also in the mix.

In 2003, the Panthers started redressing the win/loss ratio by winning both meetings – a 34-6 victory at Penrith Stadium in June over an albeit Origin depleted Newcastle, and a month later they overcame a 16-4 deficit late in the first half to overpower the Knights 29-16 at EnergyAustralia Stadium.

From 2004 to 2009, the two teams would be drawn to meet just the once in the premiership rounds – in this six year period, the Panthers one just once – in 2007 at EnergyAustralia Stadium. Meeting late in the season, they met as the two bottom teams. The Panthers would record a very comprehensive 46-12 win – at the time their biggest win over the Knights – but the Panthers would ultimately finish wooden spooners.

Two years later at the same venue, in the final premiership round of the decade the stakes were higher, with a winner takes all scenario – the victor would qualify for the finals. Penrith lost 35-0.

In 2010, the Panthers and Knights played home and away for the first time since 2003. And just like 2003, Penrith won both matches – on Easter Monday at Energy Australia Stadium, Penrith fought back from a 24-6 halftime deficit to record a stirring 34-30 victory with the match winning try in the final minute, whilst in Round 13 at Credit Union Australia Stadium, it was a more convincing 28-10 win.

But just like in the past, this was just a temporary blip, with the Knights once again going on a dominant run, this time winning all 5 meetings from 2011 to 2013.

This was broken once again in 2014 once again by Penrith, winning both matches in 2014 – a 30-8 win at Penrith in the opening round and then two months later recording an equally dominant 32-10 victory at Hunter Stadium.

Honours were split in 2015 – the Knights won at home in April, and then met again in the final round. Dubbed as the “spoon bowl”, where the loser would likely finish last, the Panthers pulled away in the second half to record a convincing 30-12 win (and due to other results going their way that round finished the season in 11th).

By 2016, both teams had contrasting fortunes, with the Panthers a team on the rise whilst the Knights were amidst a significant rebuild of their roster, and this was reflective of the results.

In consecutive matches, Penrith set a new record winning margin over Newcastle. In late 2016, the Panthers left the ‘Steel City’ with the two competition points on the back of a 42-6 win, to only be eclipsed early in the 2017 season with a seven tries to none, 40-0 shut out at Pepper Stadium. The return match later in the season saw the less fancied Knights hold a deserved half time lead before the visitors over ran the hosts in the second half for an unconvincing 30-20 win.

In 2018, the Knights were once again a team on the rise, and made the Panthers fight hard for a 29-18 win at McDonald Jones Stadium in May, with the visitors only pulling away late in the second half. Newcastle broke the streak late in the regular season with a 20-12 win at Panthers Stadium in an often fiery and spiteful encounter.

In 2019, Penrith secured a tight two point victory in Newcastle in Round 2, whilst in the final premiership round it was anything but that, and for the third time in four seasons they broke the club record for biggest win over the Knights. With both teams playing for nothing but pride, it was a close contest in the first half but the Panthers ran away with the contest in the second half finishing with a 54-10 annihilation. Nathan Cleary broke another, larger club record, posting 34 points through 4 tries and 9 goals to surpass Michael Gordon’s record for most points in a game set in 2010.

The two teams met just once in both the 2020 and 2021 seasons. In 2020, it was an all too rare draw after golden point, 14-all, at Campbelltown in the first round back from the COVID-19 enforced hiatus (with the Panthers at one stage leading 14-0).

In 2021, the Knights once again were a formidable opponent, however, the Panthers blew the contest open in the second half to win 24-6 at Penrith.