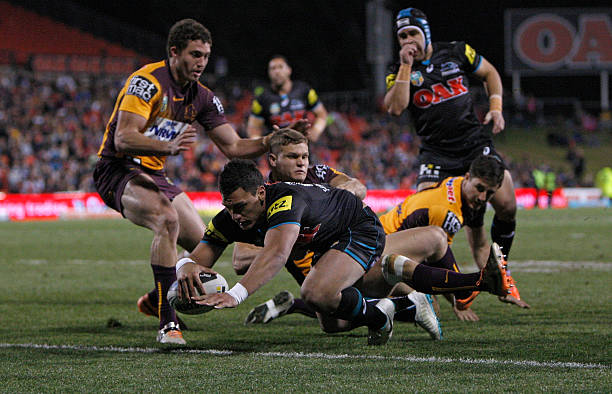 The Panthers head to head history with Brisbane from a premiership perspective goes back to the Broncos debut year of 1988. However, Penrith had previously played teams from the Queensland capital, through the now defunct mid-week competition – BRL teams Souths in 1975 and Brothers in 1976, and also a combined Brisbane Firsts in 1987.

Their first meeting was very early on in the Broncos existence – Round 2 at Lang Park. Brisbane were fresh off a resounding win over defending premiers Manly in Round 1, and whilst the Panthers provided more of a challenge, Brisbane held on for a tight 20-18 win. The return match at Penrith Park in Round 17 was yet another tight encounter, and ultimately another 2 points for the Broncos.

The Panthers would have to wait for their fourth meeting to finally register a win. Penrith would win 18-8 over an undermanned Brisbane outfit (with a number of players missing due to Test selection) at Penrith Park.

The Panthers would earn greater credit in 1990, with three meetings and three wins over a much stronger Broncos team – the first being early in the season at Lang Park, and then a commanding 18-2 win later in the season at Penrith Park. Only weeks later, they would meet for a third time, this time the qualifying final at the Sydney Football Stadium.

The Panthers were up 24-2 in the second half before the Broncos scored a few late tries to add a bit of respectability to the scoreboard. This holds a special place in Penrith’s history as this was their first ever victory in a finals match, on their fourth attempt. This was a stepping stone to a maiden grand final appearance 3 weeks later.

In their solitary meeting in 1991, the Broncos inflicted one of only four losses on the Panthers, with a 20-12 victory at Lang Park.

Honours were split in 1992, with the Panthers winning at Lang Park before the Broncos won the return clash at Penrith Stadium later in the season.

At the start of the new century, the Panthers won the first encounter, holding the Broncos try less in a commanding 18-2 win, however it was nothing more than a blip as the Broncos would win the next five to the end of the 2002 season.

From 1993 to 2002, the Broncos had shifted their home ground further south in the city to ANZ Stadium – in general, they had an imposing record during that time, and in particular over Penrith. In nine meetings over that time, the Panthers never won. The closest the Panthers got was in 1995 (17-12) and in 2002 (30-26), but in the nine meetings the average margin was 22 points.

2003 saw the tide starting to turn a little bit. Brisbane escaped Penrith with the points in the opening round. However, by Round 22, the Panthers surprising premiership tilt was in full effect, and Penrith registered their first win in Brisbane for 11 years, with a 13-6 victory at Suncorp Stadium. Five weeks later, the 2 met in the opening week of the finals series. The Panthers, who were the minor premiers and hosting their first ever finals match were down 18-4 to a Broncos team that had limped into eighth on the back of a substantial losing streak – but with a gale blowing on their backs in the second half, stormed home to register a 28-18 victory. Once again, that set a stepping stone to a grand final appearance, and ultimately their second premiership.

In what had been a lopsided history to that time (just 9 wins from 30 matches), a 2 from 2 record in finals football was a bright spot.

Although the Broncos got one back with their ANZAC Day clash in 2004, the Panthers thrashed the Broncos 46-20 in the final premiership round of the 2004 season, in what remains their biggest win over Brisbane.

In their solitary meeting in 2005, the Panthers left it very late, with a try in the final minute securing a 22-20 win at Penrith Stadium.

However, that one win in that period is a memorable one – early in the 2007 season, the Panthers came back from 8 points down with 3 minutes to go to win in golden point at Suncorp Stadium. Rookie five-eighth Peter Wallace, in just his fourth NRL appearance nailed a long range field goal to sink the defending premiers.

In 2010, the Panthers recorded victory in the one-off meeting at Suncorp Stadium with a 22-12 win.

The home teams would be the victors in the two meetings during the 2011 season, with the Panthers putting in arguably their best performance against the Broncos at Credit Union Australia Stadium in Round 10, running out 33-10 winners.

The Broncos would win their one off meeting in 2012, in the final premiership round, but the Panthers would win four of the next five from 2013 to 2016 – with the only loss being a tight 8-5 loss at Suncorp Stadium in 2015.

Three of these were at Penrith – a commanding 28-12 late in the 2013 season, holding on for a 35-34 win over a fast finishing Broncos in 2014, and then early in the 2016 season coming back from 22-6 down at half time to run down the Broncos 23-22, with debutant Te Maire Martin nailing a field goal in regulation time to break the deadlock.

From 2017 to 2019, the Broncos won all four, with all four being at Suncorp Stadium. Three of these were regular season matches, with the fourth being the 2017 semi-final – the Broncos prevailed in a tight 13-6 win.

Over the 2020 and 2021 seasons, the Panthers and Broncos were on opposite ends of the table, and whilst Penrith have won the three matches so far this decade, neither of them have been the anticipated blow outs that were predicted.

Penrith made it four from as many matches in 2022 with a 40-10 win at BlueBet Stadium in April, in which the 30 point final margin eclipsed the 46-20 win at the same venue in 2004 to be the Panthers biggest win over the Broncos.