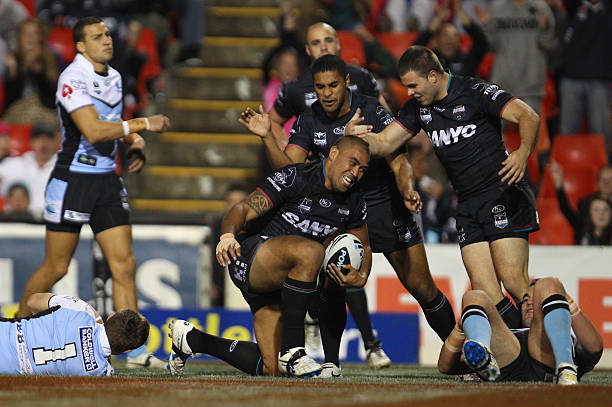 Penrith’s connection with Cronulla pre-dated their admission to the 1967 Sydney premiership, with Penrith and what was then known as Cronulla-Caringbah being two of the ten teams established in 1963 for the then second division competition. Between 1963 and 1966, they met 9 times, with Penrith winning 4, including the 1966 final (just weeks after their July promotion), and 1 draw.

Their first meeting in the big league was in the opening week of the 1967 pre-season competition, at Redfern Oval on 24 February. The Panthers prevailed in a close encounter, registering a 18-12 win.

A few months later was their first meeting in premiership football, at Sutherland Oval. Penrith won 13-10. The return match at Penrith Park in the final round saw a more comfortable win to the home team, to the tune of 22-5. The going was tough for the two new teams, with Penrith and Cronulla finishing as the two bottom teams in the 1967 premiership ladder.

The structure of the draw saw each team meet twice during the premiership rounds. Penrith would win their first five meetings, with Cronulla finally registering their first win with an 11-8 win late in the 1969 season.

From 1970 to 1972, honours were split with three wins apiece, and in each of these seasons both teams won one match, generally at home but this was reversed in 1972.

Cronulla won both meetings in 1973 – the Sharks that season qualified for their first finals series which culminated in a grand final appearance, whilst the Panthers finished with their first wooden spoon.

This would be followed by Penrith winning four straight in the regular round matches over the 1985 and 1986 seasons, culminating in a 50-14 late in the 1986 season at Penrith Park, which was the first time the Panthers had hit 50 points in a match and was also at the time the club’s second biggest ever win.

The decade would be rounded off with Cronulla winning 3 of the last 4 to the end of the 1989 season.

During this decade, the two clubs were participants in the one-off Super League season in 1997, with honours evenly split, with the home teams registering convincing wins (Penrith 38-10 at Penrith Stadium in Round 4 and the Sharks 44-20 in Round 15).

In 2000, the Panthers won both head to head matches in the regular season – they snuck home by 2 in high scoring affair at Shark Park, whilst in the final premiership round, the Panthers piled on the points with a 44-6 win at Penrith Stadium.

The next nine match streak saw the Sharks win three straight, followed by a three match win streak by Penrith, and then back to Cronulla. The three match streak to the Panthers in the middle of that sequence included two wins in the Shire – a 20-0 shut out in 2003, and a second half burst in 2004 to win 32-12.

From 2005 to 2009, Penrith would win only 3 of the 9 meetings – at Toyota Park in 2006 and 2008, and at Penrith in 2009. In 2006 Panthers fought back from a 20 point deficit mid-way through the second half to post four unanswered tries, including one in the final minute to record a stirring 32-28 win, whilst in 2008 a Jarrod Sammut field goal in golden point extra time saw the Panthers leave with the two premiership points.

In 2010, the two teams were at opposite ends of the ladder and showed in the results – in May, the Panthers were 34-14 victors whilst in the final round Penrith hit the half century as they secured second spot with a 50-12 win and consigned Cronulla to the wooden spoon.

However, from 2011 to 2019, the Sharks had a massive stranglehold on the head to head, with the Panthers winning just 3 of the 15 meetings. In 2012, there was yet another golden point win to the Panthers, whilst in 2015 there was a 26-18 win at Pepper Stadium in the ANZAC Round.

The Sharks then went on a seven match winning streak. It was finally broken by the Panthers late in the 2019 season at Panthers Stadium.

Within this seven match streak was their first ever meeting in a finals series, the week 2 semi final in 2018 at Allianz Stadium. Cronulla led 18-0 midway through the first half before the Panthers stormed home in the second half with three tries to lock it up at 20-all with around 15 minutes remaining, with the more battle hardened Sharks managing the final minutes better and squeaking home 21-20 in regular time.

In the COVID disrupted and shortened season of 2020, the two teams met twice during the regular season. In July, the Panthers thumped the Sharks 56-24 at their temporary home at Kogarah – with this match best known for the four tries scored by debutant Charlie Staines. This was later followed up by another big win at Penrith later in the season.

At BlueBet Stadium in their 2021 meeting, the Panthers put the Sharks to the sword with a 48-0 hiding, and eclipsed the 50-12 win in 2010 as the Panthers biggest ever win over the Sharks. However, just over a month later Cronulla outlasted an Origin depleted Penrith team with a 19-18 win at Kogarah.

The solitary 2022 meeting was at BlueBet Stadium in July – the Sharks led 10-0 after 12 minutes, however, the Panthers would score the next 20 and win by 10.

Cronulla is also 1 of 2 clubs (the other being Canterbury) that has played at least once against Penrith in all their seasons from 1967 to now.