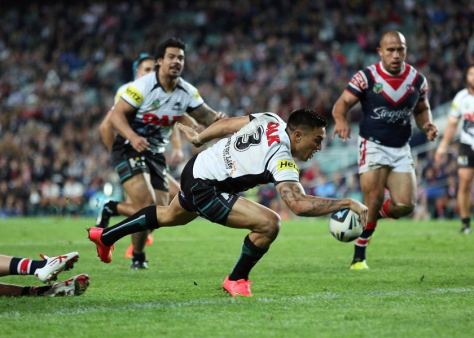 The Panthers rivalry with the “tri colours” from the eastern suburbs goes back to 1967.

The first meeting with the Eastern Suburbs Roosters was at Penrith Park on 7 May 1967. The Roosters led 7-5 at half time and then went on to record a relatively comfortable 26-10 victory. In the return match later in the season at Sydney Sports Ground, Penrith would score the only two tries in a 12-all draw.

In 1968, Penrith recorded their first victory over Easts, scoring a late converted try to win 19-18 in a close and thrilling contest at Penrith Park.

However, the remaining 3 clashes to round off the decade were victories to the Roosters.

This streak was extended to five with wins in both meetings in the 1970 season.

The Panthers broke the streak with a 17-8 win at Penrith Park in 1971, but the Roosters would win the next three to the end of the 1972 season.

In 1978, the Panthers would record their first victory over the Roosters at Sydney Sports Ground, holding off a fast finishing home team to record a 15-13 victory. But this would be merely a speed bump in the overall head to head ledger, with Eastern Suburbs winning 11 straight to the end of the 1983 season.

At the end of the 1983 season, the Panthers had only won 5 of the 34 matches between the two clubs.

Penrith put an end to this streak with a 16-8 win at Penrith Park early in the 1984 season – historically it was a significant match as it was Greg Alexander’s starting debut, and he made a sizeable contribution to the victory. Later in the season, the Panthers recorded a big 32-12 win at Sydney Sports Ground.

The win in 1989 started a five match winning streak to the end of the 1992 season. The two meetings in 1991 were the most dominant in that streak, with a 32-6 win at Penrith Stadium and then a 42-8 win at the SFS in the final premiership round.

Meetings were limited between 1993 and 1999 – the only time there were two meetings in that time was in 1994, plus the two teams did not meet in the 1997 season as they were playing in opposing competitions – Penrith in the Super League and the Roosters in the ARL.

In 1995, Eastern Suburbs rebranded themselves as Sydney City.

The Roosters won 4 of the 7 meetings to round off the decade, but quite significantly the Panthers won the two matches in 1998 (at Penrith) and 1999 (at the SFS). By that time, the Roosters were building into a powerhouse, whilst the Panthers were hovering around mid to bottom table.

The Roosters once again rebranded themselves in 2000, now called the Sydney Roosters.

In the eight match stretch between 1998 and 2002, the Panthers won five, including both matches in the Panthers wooden spoon season of 2001, and were developing somewhat of a hoodoo against the high flying Roosters.

But the rivalry was just starting to heat up.

In Round 3 2003, the Panthers notched up yet another “upset” victory, holding on to a 23-22 victory against the defending premiers at Aussie Stadium after fighting back from a 10-4 deficit at half time. However, 17 rounds later at Penrith, this was a top of the table clash between the hottest team in the competition and the visitors. The Roosters thrashed the Panthers 38-24 to regain top spot, however, the Panthers would ultimately win that battle and would be crowned minor premiers, with the Roosters settling for second.

As is the fitting scenario for a grand final, first met second. Billed as an east versus west battle, it was played on a wet Sunday evening on 5 October at Telstra Stadium, and was a match often referred as one of the best ever. The Panthers held a 6-0 lead at half time in a captivating battle, but the Roosters soon had it locked up at 6-all. Minutes later, the Roosters looked likely to score again after capitalising on a Panthers handling error and running the ball down the sideline, but the play broke down courtesy of a perfectly timed cover tackle from Scott Sattler and bundling the Roosters winger into touch. It seemed to lift the Panthers, with hooker Luke Priddis charging over from dummy half to regain the lead, and then sealed the match with a fantastic cut out pass to find winger Luke Rooney to score his second try and stretch it out to 18-6, and thus secure the Panthers second premiership.

A grand final replay at the same venue in the early rounds of 2004 saw a 22-6 victory to the Panthers, and provided confirmation to the doubters that the grand final victory was indeed no fluke. Later in the season, though, the Roosters blew the Panthers away in a near perfect first half at Aussie Stadium, and went on to win 44-12.

From 2005 to 2010, there were 10 matches, in which Penrith won 4 and the Roosters won 6. One of those 4 victories was an emphatic 48-6 win at Penrith in 2009. To date, it is the club’s biggest win over the Roosters.
In the 2010 finals series, the Panthers and Roosters met in week 2 of the finals series at Sydney Football Stadium. However, this was a match dominated by the Roosters from start to finish, but the under strength Panthers still put up a fight. The Roosters prevailed with a comfortable 34-12 victory.

From 2011 to 2015, the ledger has once again tipped in favour of the Roosters, with Penrith only winning 3 of the 9 encounters. This includes an 18-0 shut out at Allianz Stadium in 2012, but another of these wins has been etched into the Panthers club folklore.

In the 2014 qualifying final at Allianz Stadium, the Roosters were up by 6 going into the last few minutes of the second half, before a spectacular try Dean Whare and the follow up sideline conversion from Jamie Soward locked it up at 18-all. Then, with 15 seconds remaining in the contest, Soward pulled a second clutch play in almost as many minutes, with a field goal from just over 30 metres out giving the Panthers a one point victory. It earned Penrith a spot in the preliminary final.

Penrith fought back from a 10-0 deficit in the opening round of the 2020 season to record an upset 20-14 victory over the defending premiers. Later in the season, they met again at the same venue, and for the fourth time in the finals arena, with the minor premiers hosting the fourth placed Roosters. Just like the Round 1 encounter, the Roosters scored the first two tries to lead 12-0, before an unanswered 28 point burst from the Panthers had them leading 28-12 midway through the second half. Penrith would withstand a spirited comeback from the Roosters, with a Nathan Cleary field goal ultimately proving the difference, but the Panthers were in possession in the dying seconds and held on by the barest of margins.

In 2021, the winning streak was extended to four, with a commanding 38-12 win at BlueBet Stadium, and a much closer contest later in the season at Suncorp Stadium.

Midway through the 2022 season, they met at the Sydney Cricket Ground, where the Panthers were comfortable 32-12 victors – and was only Penrith’s second win from twelve matches at the venue. Later in the season at Penrith, the Roosters led midway through the second half before two tries to the Panthers secured a hard fought 26-18 win.