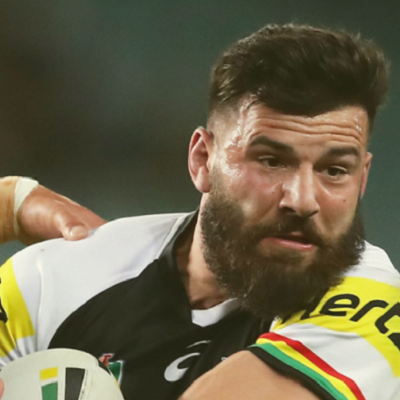 St. George junior who played lower grades at South Sydney and had also played international football for his ancestral home Lebanon before being offered a contract at Penrith for the 2012 season.

After starting the season in the NSW Cup, Mansour made his NRL in May of that year, scoring a try in his first match with one of his first touches of the ball. His acrobatic finish in the corner would be a sign of things to come, scoring many more tries in a similar fashion. He would slowly cement a spot in the Panthers backline, mostly on the wing, and soon become a crowd favourite with his blockbusting runs on the flanks and by 2014, he had established himself as one of the competitions premier wingers.

In 2014 was the club’s top try scorer for that year with 15 tries, including one in the qualifying final, and it was topped off by making his Test debut for Australia later that year, becoming the Panthers 17th Kangaroo.

After a relatively quiet 2015, another stellar year in 2016 saw him make his Origin debut for NSW, once again finishing the club’s top try scorer and awarded the Dally M Winger of the year award. It also saw a return to the Australian team for the Four Nations tour – after one appearance for the Kangaroos, it would end prematurely with a serious knee injury.

Mansour returned midway through the 2017 season, scoring his 50th try and making his 100th appearance for the Panthers. His late season form saw him make a return to the Kangaroos, being a member of their World Cup squad, and making two more Test appearances during the group stage.

A modest 2018 was followed a very quiet 2019 – it saw him score only one try and at one stage was dropped to the NSW Cup.

By 2020, he was the longest serving player in the NRL squad and it saw once a return to his block busting form, making his 150th appearance (and marking it with a double against Cronulla), on his way to posting a total of 12 tries – the last of these four pointers was in the grand final loss to Melbourne, which also put him to outright fifth in the top try scorers for the Panthers with 74.

Soon after the grand final, he was advised that he would not be a first choice winger for 2021, and soon after successfully gained a release and signed with South Sydney. A season ending injury late in the season denied him the opportunity to line up against the Panthers in the grand final. His NRL appearances were once again limited in 2022, and was selected for Lebanon in the World Cup. His future for 2023 at this time remains uncertain.