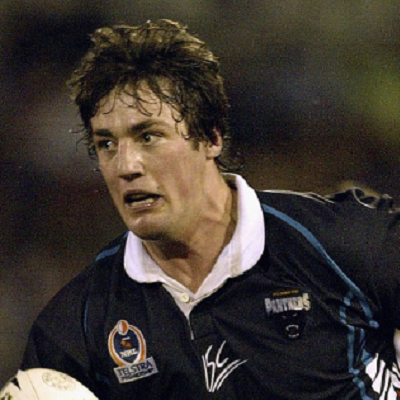 Tall back rower who was a Cambridge Park junior, and was used to great effect off the bench during the Panthers premiership winning season in 2003.

Waterhouse’s form was rewarded with selection on the Kangaroo Tour, and achieving the rare feat of representing his country before state, becoming Penrith’s 12th Test player and capping it off with a try on debut. He would play all three matches against Great Britain on that tour.

In 2004, he gained a starting role at lock, and would later make his New South Wales debut during that year’s State of Origin series.

By 2007, he had disappeared off the radar with respect to representative football, and injury would restrict him to only 8 appearances that year.

He would shift from lock to second row in 2008. A reappearance of form saw Waterhouse return to both New South Wales and Australian selection in 2009 – he would claim a bit of unwanted history in Game 3 of the State of Origin series that year by becoming the first New South Wales player to be sent off (he would later be cleared by the judiciary).

His senior status would be rewarded by being named as stand-in captain throughout 2009 and 2010 whilst club captain Petero Civoniceva was unavailable.

Midway through the 2011 season, he announced his departure from the Panthers at season’s end, signing with English Super League club Warrington. He would play three seasons before returning to Australia and playing out his career with Thirroul Butchers in the Illawarra competition.

In 2016, Waterhouse was short listed in the Panthers Hall of Fame.