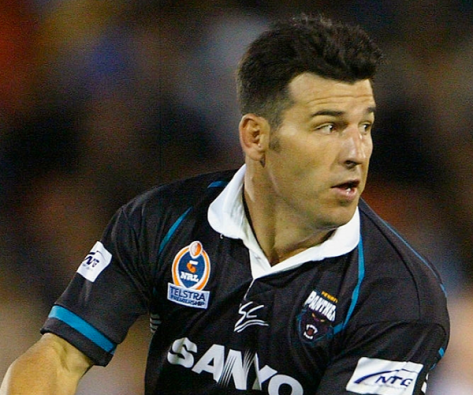 Penrith junior (from Colyton) who made his first grade debut as an 18 year old in 1996. Starting as a halfback, Gower would soon alternate between the number 7 and hooker.

The following season, he made his representative debut for both the Super League New South Wales and Australian teams.

In 1999, he was selected to make his Test debut, however, lost his spot before the match due to a disciplinary incident. Soon after, he would make his debut for New South Wales in the State of Origin series, the first of six matches that would span 5 series to 2006. At the end of the season, Gower would finally make his Test debut during the Tri Nations tournament, playing the first of 18 Tests.

In 2000, he was named the Dally M hooker of the year and was a member of the victorious World Cup squad.

After re-signing in 2001 (with the infamous get-out clause if he was unhappy), Gower was named club captain in 2002 with the departure of Steve Carter, and reverted to the halfback position after the signing of representative hooker Luke Priddis. He would grow into the captaincy, culminating with leading the Panthers to premiership glory in 2003, replicating fellow local junior Greg Alexander in 1991 when lifting up the premiership trophy. He would be rewarded with selection on the Kangaroo Tour, playing in 2 of the 3 Tests.

In the years after their premiership success, Gower would continue to lead the Panthers, showcasing his competitiveness and toughness. In 2006, another disciplinary incident in the pre-season saw him stripped of the club captaincy (however would still lead the side in 2 matches that year). As part of the season’s 40th anniversary celebrations, Gower was named on the bench in the Team of Legends.

In 2007, he regained the captaincy but would successfully seek a release at seasons end with two seasons remaining. He would leave Penrith with 238 first grade appearances, finishing just 6 short of the club record held by Steve Carter.

Gower would leave the NRL by switching to rugby union, and left Australia by signing with French club Bayonne. Being of an Italian background, he would play 11 Tests for Italy, before returning to rugby league in 2012, playing for the London Broncos in the English Super League.

Citing a desire to return to Australia, he returned to the NRL midway through the 2013 season, however, for rival club Newcastle – one of Gower’s 6 matches for the Knights was a visit to Penrith. It would be a swansong, retiring at the end of the season.

Further club honours would await Gower, being named as one of the four inaugural inductees to the Panthers Hall of Fame in 2016 and being awarded life membership in 2018.