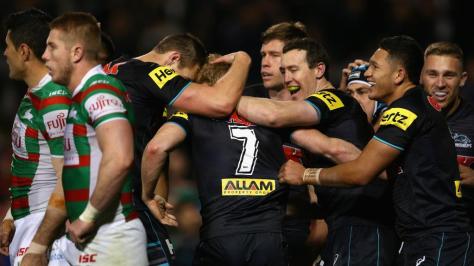 Penrith’s head to head history with South Sydney, the self-proclaimed “Pride of the League” dates back to the club’s debut season in 1967. Back then, the Rabbitohs were one of the heavyweights of the Sydney premiership.

Their first match was at Penrith Park on 21 May 1967. A football lesson was dished out to the premiership rookies, copping a 39-0 thrashing. The return match at Redfern Oval in August saw the Panthers give a better account of themselves, but still went down in a much closer encounter 14-7.

The Panthers would chalk up their first win in their third encounter. In the 1968 match at Redfern Oval, both teams were locked up at 7-all at half time, with three penalty conversions early in the second half to Penrith giving the visitors a 13-7 lead. Whilst the Rabbitohs struck back with a converted try to narrow the lead to 1, the Panthers defence stuck it out and held on for a 13-12 victory. The return match later in the season would be Penrith’s first appearance at the Sydney Cricket Ground in the equally prestigious Match of the Day. In a tight see-sawing battle, Penrith led 14-12 late in the second half before Souths regained the lead late in the match and clung on for a 19-14 victory.

Between 1969 and 1983, the Panthers would only win 6 from the 30 matches played, along with 1 draw.
This one draw would be at Penrith Park in 1970 – the home team fought back from 16-9 midway through the second half to lead 18-16 before a South Sydney penalty conversion with two minutes remaining saw them scramble to a lucky draw.

The best of these 6 wins was undoubtedly the win at Penrith Park in 1977. The Panthers piled on 5 tries in an 11 minute period to score a total of 9 tries on their way to a crushing 43-2 victory. This would remain the club’s biggest ever win until 1998 and remains the Panthers biggest ever win against Souths to this day.

On the flipside, Souths dished out a few hidings of their own during this time, with three 30-plus point hidings, including a 59-5 annhilation at Redfern Oval in Penrith’s “annus horribilis” season of 1980. This remains the Panthers worst ever loss to the Rabbitohs and the club’s fourth ever biggest loss.

From 1984 to 1999, the tables were turned dramatically, with Penrith winning 15 out of their 20 encounters. This included a 7 match winning streak between 1988 and 1993, which remains the longest against any one club to date for the Panthers.

Two wins standout during this run.

The first was a 19-8 win against the eventual minor premiers at the Sydney Football Stadium in 1989, which snapped a 12 match winning streak for the Bunnies. It was a dull first half with both teams locked up at 2-all, before the visitors pulled ahead to lead 15-2 midway through the second half. Whilst Souths would score a converted try to reduce the margin to 15-8 before Penrith iced the victory with one final try.

The following year South Sydney had free fallen to the premiership cellar, and came to a cold and wet Penrith Park to be handed a 44-10 hiding. The Panthers led 18-0 at half time, and whilst the visitors pulled the margin back to 12 early in the second half, Penrith would continue to pile on the points, including Greg Alexander who kicked a then club record 10 goals.

There was a brief cessation in their hostilities in 1997, when Penrith played in the break away Super League competition and South Sydney contesting in the ARL competition.

With re-unification occurring with the formation of the NRL, the two teams would meet once in both 1998 and 1999, with each of these matches at Penrith Park. The Panthers victory in 1998 was typified by a second half surge, which yielded 4 tries and converted a skinny 2 point lead into a comprehensive 36-18 victory. South Sydney would return in 1999 to perform a 20-0 shutout.

A matter of months later, South Sydney would be sensationally axed from the 2000 season for failing to meet criteria that was established upon the reunification of the competition. However, it must be said that Penrith were hovering close to the axe too at this time and had been lucky to survive. The Rabbitohs path to re-admission was hard fought, and they returned to the premiership in 2002.

Their first meeting after re-admission saw the fourth match in a row at Penrith Stadium, with the visitors recording a 23-16 victory. However, the Panthers would win the return clash later in the season at Gosford.

Penrith would win 8 of the next 12 to the end of the 2009 season – the four losses were away from Penrith, including an upset loss in 2004 when the eventual wooden spooners ambushed the defending premiers at Aussie Stadium, and then three at ANZ Stadium, where Souths had relocated from the 2006 season.

The new decade started with yet another Rabbitohs victory at ANZ Stadium in late May, but the Panthers would return later in the season with a 54-18 annihilation at CUA Stadium – the Panthers led 40-0 at half time, and Michael Gordon posted what was then a club record 30 points from 3 tries and 9 goals.

After Penrith’s win at Centrebet Stadium in 2011, South Sydney won the next four in a row up until 2014.

The Panthers broke the streak in 2015 at Pepper Stadium. With the Rabbitohs visiting as defending premiers, the Panthers got the jump by holding an 18-0 lead halfway through the second half, and whilst they conceded a late try still ran out comprehensive 20-6 victors.

The honours were evenly split from 2016 to 2019 with three wins each, and Penrith finally recorded their first win over Souths at ANZ Stadium in their eighth match at the venue, with a late field goal seeing Penrith win 19-18.

In 2020, the Panthers overcame the Rabbitohs in the second half with a 20-12 win at Kogarah in the regular season, and then met a second time in the preliminary final at ANZ Stadium. Similar to earlier in the season, Penrith withstood a late South Sydney surge in the second half to hang on for victory, and earn their first grand final appearance since 2003.

In the regular season, the much anticipated top four clash at Dubbo in mid-June finished with a record breaking 56-12 over South Sydney, with Penrith running in 9 tries and eclipsing the previous biggest win over the Rabbitohs set in 2010. The return clash at Suncorp Stadium later in the season was more of a contest – the Panthers overcame a 12-0 deficit in the second half to record an ultimately convincing 25-12 victory.

With Penrith finishing second and South Sydney third, the two teams met three weeks later in the week 1 qualifying final. The lower ranked Rabbitohs sprung what was deemed an upset win, propelling them to the preliminary final but it allowed Penrith another chance. Penrith won the semi final the next week and also earnt a preliminary final berth.

With both teams winning their preliminary finals, they would face off for a fourth time in the grand final.

With Brisbane hosting the grand final for only the second time, the Panthers led 8-6 at half time, and then pushed it out again to 14-8 with 13 minutes to go. The Rabbitohs ensured a tense finish with a try in the 73rd minute, only for the conversion to be unsuccessful. A two-point field goal attempt dribbled over the dead ball line with 45 seconds remaining, and with a seven tackle set, the Panthers simply ran the ball out of dummy half to run down the clock, and with it their third premiership.